It was a cold morning in Beijing, below zero before dawn. We packed our lunch and were off on the coach at 8 o’clock for the Great Wall, some 45 km away. The Wall originally stretched for over 6000 miles, from the sea in the east to the Gobi desert in the west. The best preserved section is at Badaling.

The Great Wall isn’t one continuous structure, nor was it all built at once. Many Chinese empires and states constructed such fortifications along their northern borders, to protect themselves from the fierce nomads who lived on the wild steppes. As these depended on horses to make their raids, a wall was a useful deterrent.

The first Emperor of China, Qin Shi Huang, who we have already met – it was his terracotta army – unified many of these state walls, so is often credited with building the Great Wall. Very little of his actual work survives though; the upgrades carried out by the Ming dynasty (1368 -1664) are what we see today. 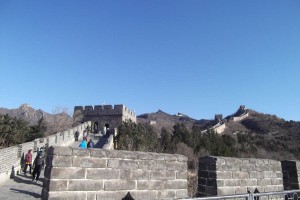 We disembarked on a plaza surrounded by little shops and found ourselves barely prepared for the bitter cold, worsened by the thin, icy wind. This bit deeper as we ventured out along the Wall itself, which is naturally on the highest ground. 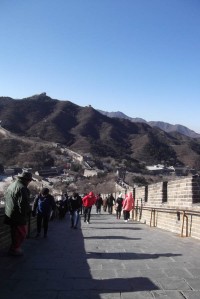 The first part of the ascent was steps, then rather steep ridged cobbles. These could have been difficult in wet weather. Although you could walk quite a long way along this section, we only made it to the third guard tower before the cold got the better of us. At least there weren’t the crowds we’d been warned about. 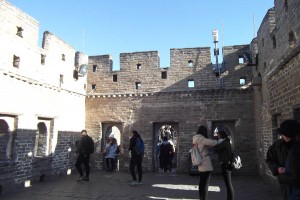 We could see that it would be a splendid place for a hike in the spring, following the dragon-like curves away into the hills. There are hotels in Badaling, as well as day tours from Beijing, but it may not be either safe or permitted to take off on your own for any length of time. A number of guided walking holidays are available. It’s a good policy to check reviews before booking. 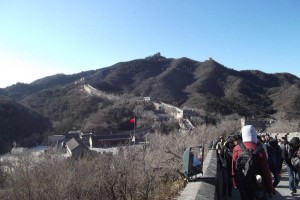 The surfaces of the walls are covered in graffiti marks scratched into the stone, possibly by the hundreds of soldiers standing guard in this cold and lonely outpost over the centuries.  This custom explains the baffling ‘No Scratching’ notices we’d seen around other important monuments! 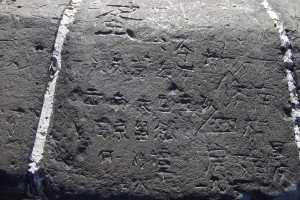 Most of us returned to the Hotel Cafe quite soon. The staff gave us bottles of hot water to hold as we ordered coffee! 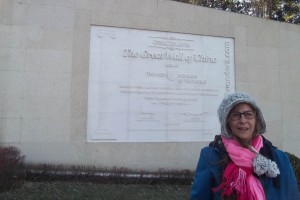 Tired and cold, Linda and I rebelled against the walk in the park and the Ming tombs. We stayed on our tour bus and enjoyed the peace of the country. The bus driver chatted to the persimmon seller at her roadside stall; it was nice to just be there, in an ordinary place. 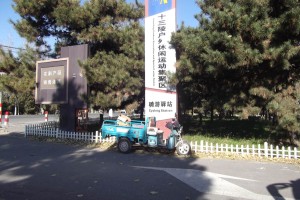 By the time we arrived at the tea garden, we were fairly awake again, and a few sips of refreshing samples were welcome. I bought some Puer tea, which improves with age unlike the other herb teas languishing on my shelf. More elaborate brews unfolded into flowers in your cup! 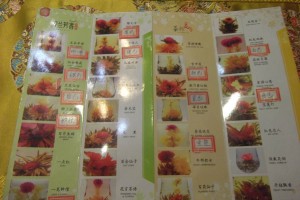 We were offered some optional extra tours – a rickshaw ride, viewing the night lights – but none of these involved going back to the hotel for a rest first. ‘Maybe later’ we all said and grumbled so much we got taken back in time for dinner. Nobody wanted to miss the final day by being too tired!

Over the centuries, the complicated characters became very difficult to understand, such that literacy was only possible for the leisured classes. After the formation of the People’s Republic, written Chinese was simplified in various important ways, and now nearly everyone can read.

Next week – The Forbidden City and the Dragon Throne