The Somerset Levels are flat, and barely above sea level.  Most of the land is drained now, to form cattle pastures, but it used to be a mix of swamp, wet woodland and bog.  The value of the latter is now becoming appreciated for its role in flood control.  Towntree Farm is decades ahead of the game!

In the 1970s, farmer Chris Burnett began a visionary landscaping project on the family farm.  Starting small, with a pond outside the farmhouse, he used the spoil to form a lawn, then landscaped a neighbouring field in a similar fashion.

The left over soil made pathways this time, and the pond soon attracted a breeding pair of swans.  Encouraged by this, Chris dug out a seven and a half acre pond, specially designed for water birds.  It’s quite shallow, which allows a good growth of reeds.

He planted the new high ground with trees and plants, both wild and cultivated.  Once these became established, hundreds of migratory birds began to visit, and he has hopes of attracting a pair of cranes soon.

In 1987, ‘Capability’ Chris – as he had become known – was persuaded to open the 22 acre Nature Garden to the public.  He celebrated this by making a ‘Peace Arch’ at the entrance from the car park, which is covered with climbing roses in summer. 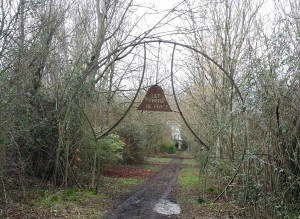 Following the yellow arrows, the curious visitor traverses the winding paths.  It’s not just the peaceful atmosphere and nature that bring people here, though.  The trail is dotted with statues and sculptures, left to gradually merge with the wild.

As the path meanders, bordered by ditches, you can see inaccessible alcoves.  Further on, the twists and turns suddenly bring you out into that very clearing!

There are benches made of stone slabs, or of dozens of horseshoes welded together. 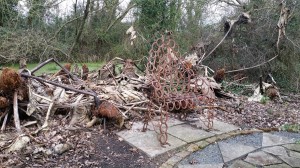 I don’t know what the huge dead flowers behind this chair are; I’ll have to return later in the year and see them growing.  Their leaves are the size of umbrellas! 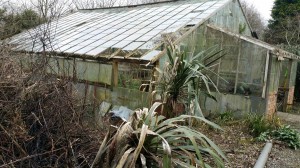 The decaying greenhouse lends an apocalyptic air to the place, along with the greening statues.

I’m definitely coming back in the summer for a picnic in those shady groves!  If you’d like to visit Towntree Farm, and marvel at how much difference one man can make, there are instructions here. 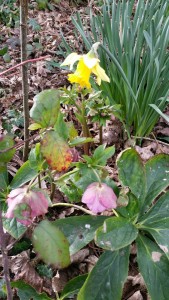 Compared to a grass pasture of the same size, the Nature Garden clearly holds a lot more water.  This is restrained by the natural features re-created here, protecting land further downstream during times of flood.

The Towntree Farm project has always been a hobby, laid out simply for the delight in nature.  Using permaculture and forest gardening principles, other such gardens could justify their existence with some financial return.