Wow! What a great festival!

I love off grid events – without the diesel generators churning away, the sound levels are gentler, the lights less glaring. The whole atmosphere is more relaxed. It fits into the splendid natural setting of Piercefield Park like a hand into a glove.

The weather was fabulous, with plenty of shady places under trees or in cool venues to shelter from the hot sun. At night, gaily illuminated cafes, bars and venues were strung on curving lines of coloured festoon lights. 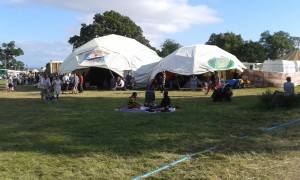 If you were inclined to learn resilience skills, there were abundant workshops teaching everything from archery to willow weaving.

Steward Control at the Green Gathering was the last job I did before retiring from event work to promote resilience. Some of the volunteers remembered the trial version of the Resilience Handbook which they were issued with back then! Training event stewards to cope with camping out – often for the first time – provided valuable material for the final version.

The splendid Laura now manages the stewards, but my colleague Linda Benfield is still a director of our company, and also of the Green Gathering itself. We created the Resilience Wheel concept together some years ago.

We were struggling to write an energy questionnaire for Glastonbury, for a Transition Town funding bid. The problem was the huge disparity in energy awareness from house to house, and how to reflect this in a meaningful sense. At the same time, we were involved with the Town Council’s emergency planning committee.

The two projects started to overlap; we began to see the issues around putting these plans into practice, the multiple factors, the many variables. The number of things that should be in place and weren’t. Surrounded by flow charts and spider diagrams, we had a sudden insight and reinvented the wheel!

Anyone can find their place on it. All your efforts towards a sustainable lifestyle – that would be one which isn’t going to vanish in a puff of fossil fuel smoke – feed into one central goal. Resilience. You can’t do without it.

The Resilience Wheel isn’t just a picture. It’s a tool. You have to pick it up and use it.