I find writing a book quite intense, especially towards the end. When the final draft of ‘Recipes for Resilience’ left my desk for that of Magic Oxygen publishers, I was in the mood for adventure. My colleague, Linda Benfield, had booked us on to an RSD tour of China – luckily I’d met my deadline – and we flew to Beijing on the 6th November.

From there, we had to manage the transfer to Shanghai ourselves. It looked daunting; there wasn’t a lot of time to achieve it. There were some films on YouTube describing the route to take; down the escalator and on to the shuttle train to Domestic Departures. We didn’t have to collect our luggage after all, possibly since both flights were with Air China and booked together. It’s this sort of detail that I value a tour company for. 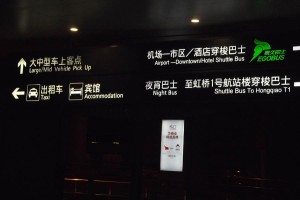 If you’re arranging your own programme, leave a good couple of hours for transfer in case of misunderstandings. The queue at Chinese Immigration can be quite long too. Have your arrival card filled in before you get to the desk.

Our fantastic tour guide, Kevin, was at Shanghai Airport to meet us. We drove to the Golden River View Hotel through the rush hour smog arriving, with just enough energy after over twenty four hours of travelling, in time to dine and get an early night.

The smog had gone in the morning; we learned it was rarely as bad as the day we’d arrived, when it reminded me of my Midlands childhood. There are moves to increase the proportion of electric vehicles, as transport accounts for about 30% of the pollution, and to explore the use of natural gas and renewables instead of coal.

RSD Travel has mixed reviews, but the one thing everyone agrees on is that their sightseeing agenda is relentless. We had very little time at the excellent hotel buffet before boarding the tour bus for a look at the Jade Buddha Temple; we learned to get up earlier in future. RSD provides more of an adventure than a holiday, but after fourteen days we really felt we’d seen China and at a very reasonable price.

The Yu Yuan came next; beautiful formal gardens in the centre of the megacity. A natural setting is created in such gardens. Trees, ponds and winding paths combine into different vistas, viewed from small pavillions or cloistered corridors. There are rarely any statues, only ambient rocks suggestive of various shapes in a very effective manner. 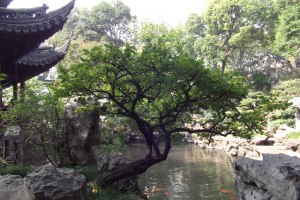 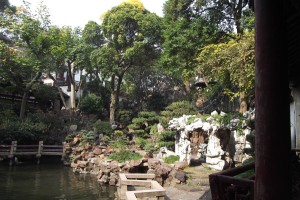 At lunchtime, we were released into Shanghai Old Town to do some free range shopping; you could easily spend an afternoon here picking up quality trinkets for gifts. 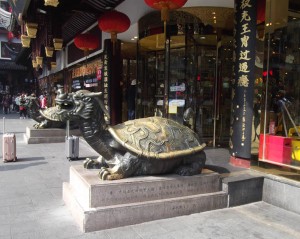 If the waterside teahouse doesn’t tempt you, there’s a Starbucks not far away. 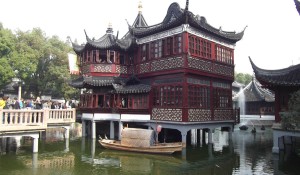 One last trip before dinner, to the spacious, gated French Concession area. People practised Tai Chi, and what we later learned was square dancing, in the empty road. Others flew kites in the park. 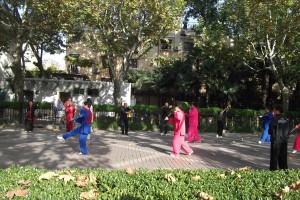 After dinner, back on the tour bus for a river trip (optional extra). Like most places in the city, the boat was crowded, so we paid extra for seats by the rail. It was well worth it; Shanghai waterfront illuminations are legendary.

All this, and jet-lag too – Beijing time is 8 hours ahead of the UK. Next week – A Significant Encounter in the Water Village