On the second day, there was a trip to one of the water villages around Shanghai. The city is built on the delta of the Yangtze River; the surrounding countryside is crossed by many small rivers. To the west of the urban area, there are several ancient towns which preserve much original culture. We were going to Zhujiajiao, about 50 km from the city.

We began our explorations in the Kezhi Gardens. Our guide led us through the living areas, now displaying various examples of the crafts once practised there, to a large room which housed a model of the original design. 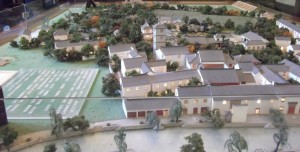 I was stunned – it was an exact depiction of the imaginary ‘resilience village’ which I’d described in ‘Recipes for Resilience’! The establishment used to house not only an extended family, but also students learning about plants. The ethic was that the whole community would work on the fields and vegetable gardens, as well as studying, in order to have a balanced life.

Although the place had undergone changes – at one point it was a junior school, and is now an exhibition – the small craft workshops still housed skilled artisans. You can watch paper-cutting, calligraphy and embroidery; pick up some pretty souvenirs.

Some of the extensive fields survive as a demonstration area on the other side of the lovely formal gardens. I saw rice ready for harvest for the first time; it certainly seems to give a good yield of grain.

The garden itself was lovely. There was more space here than in the Yu Yuan; the water features were more intricate and the pavillions grander, with higher levels. You can see more pictures here, and read a brief history.

Too soon we had to continue our tour, emerging to take a walk along the riverfront and down the narrow colourful alleyways. These were lined with small stalls – the weather is quite warm here, even in November – selling all manner of enticing articles. Often the craftspeople themselves would be there, working on their next piece as they waited for customers. 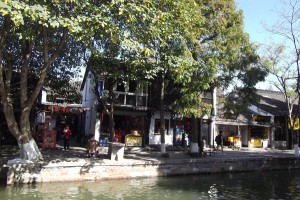 We paused for roll call by the famous Fang Sheng bridge, and were let off to explore. Across the bridge was an area of new development; modern apartments and shops, with the ubiquitous Starbucks. Part of the old bank was artificially preserved to ensure the survival of the old culture; the rest seemed to have managed it unaided.

Zhujiajiao water village is one of the closest to Shanghai. If you’re feeling adventurous, you can get there by public transport. Most city hotels provide small bilingual cards at Reception, instructing taxi drivers on returning wandering guests to the right address; make sure you pick one up if you’re going exploring without a guide.

Next week: Towers, silk and shopping in Shanghai