The weather in the Summerlands went straight from cold and icy to cold and wet.  I planted some onions, but the peas went in the neighbour’s greenhouse to get started, and the potatoes are still chitting in the shed.  I found out that you should wait until the soil is roughly the same temperature as the potatoes before planting them.  I’m experimenting with new varieties this year, so there should be notes.

The wasabi plants thought they might die, so they flowered again; they haven’t done this since the last snow, seven years ago!  There are four pots, all cloned from the same rootstock, and they all flowered at once, even the one kept some miles away at the allotment.

Starting with a scrawny two-year plant from the market, over the years their leaves have become smaller, glossier and tougher.  Wasabi are awkward customers in that they like damp but cope badly with slugs; they make up for this by thriving in the cold weather.

I planted out the burdock salvaged from the resilience field.  Three plants had shared a pot over the winter, and their calorie-rich roots grew so fast that there was hardly any soil left.  I’m hoping to start a breeding colony in the woodland strip.

I’ve written about burdock in ‘Recipes for Resilience’ as it’s a good emergency food source.   The root fattens up in the first year, and is used up in the second summer to produce the large flowering stems.  This is a good time of year to harvest these roots, but only the spring leaves can be seen. 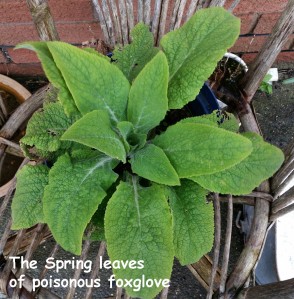 Growing both these plants in your Resilience Garden enables you to study them in detail, so you won’t dig up the wrong one – note the foxglove is kept in a pot.  Feel the leaf textures and observe the shades of green.

Practise  identifying them on a forest walk – but don’t dig up wild plants as that’s illegal in the UK unless you have the landowner’s permission and it’s not an endangered species.  Take pictures, and return later in the year to see if you were right.  It takes a couple of years’ study to really learn a plant.

The dismal, threatening weather meant the planned Magic Oxygen Literary Prize Giving was filmed for YouTube.  None of us were confident about travelling to Lyme Regis, given the weather forecast!  Although we didn’t get much snow here in the South, the rain was relentless and there was a lot of water on the roads.

Saturday itself was almost a nice day.  I worked on some of the infrastructure projects in the garden, feeling that these should have been finished weeks ago.  The plum tree is blossoming with the utmost caution; the bumblebees are about, but I haven’t seen any honey bees yet.

Winter slinks out of the door, turning to snarl “I’ll be back!”, as Spring tiptoes tentatively in.