Things have felt pretty relentless this summer – no sooner have I dealt with one thing than another challenge comes forward! Many other people seem to be experiencing the same problem; if you’re one of them, I think October should be a bit calmer. It’ll be a ‘new normal’ though.

With the struggle to keep the vegetables watered, we’ve had to let half of the Resilience Allotment go. The soil isn’t only poor, but infested with smothering weeds and disease. The brassicas succumb to a white mildew, peas dislike the exposed site and potato blight is endemic (because it’s ‘such a good idea’ to plant sprouting supermarket potatoes).

Beans, garlic and courgettes do well, and the raised beds used clean soil imported from the Resilience Garden so the potato crop was small but healthy. Due to years of selective weeding, this soil is full of seeds from edible plants. Left unattended for awhile, borage, marigold, rocket and spinach flourish. Unlike the perennial weeds they replace, these plants can be pulled up easily and composted.

Towards the end of autumn, I’ll clear the ground and plant broad beans and garlic. Instead of the allotment area, I plan to build a few more raised beds in the garden. It’s easier to cultivate food plants nearer home when you have a busy lifestyle!

However, growing just that bit of extra food has meant far less trips to the supermarket, with a considerable saving in money. I got caught out the other day though. Hungry, and with a day’s wages in my pocket, I popped into the local supermarket to get a little piece of steak and some mustard. The bill for all the things I didn’t really need came to over £25! And I forgot the mustard!

Food is a major part of community resilience. It’s such a large subject that I had to write another book (‘Recipes for Resilience’ – out soon!) just to cover the basics of gardening and cooking.

Travel, on the other hand, benefits your personal resilience, as well as providing a welcome break from a dull or oppressive routine, You don’t have to go far – take a picnic lunch and buy a Day Explorer bus ticket. Pretend to be a tourist in your local area for the day.

Travel takes you out of your comfort zone and lets you practise carrying just what you need to get by. Combine it with attending a workshop on your chosen craft, or even go on a survival course for maximum resilience!

So that’s why I write a lot about food and travel. There are many other aspects to practical resilience however, and I’ll spend some time this winter going over the other sections of the Resilience Wheel. 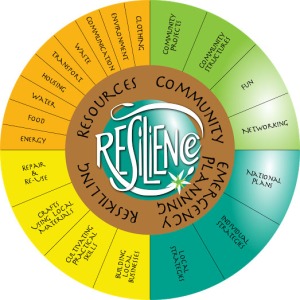 Even here in Somerset, land of marshes and muddy festivals, there’s been no proper rain for weeks, only an occasional condensation like a wet mist.  It’s been relentlessly dry, and now a chilly breeze batters the valiant peas clinging to their frames.

The soil of our resilience allotment, overused and drained of nutrients by the last gardeners, has turned to rubble where we’ve dug it; concrete elsewhere.  We’re holding the rest of our seedlings at home still, where they can have more water, but they’ll have to go out soon.  The dark line to the right in the picture below is a compost-filled trench ready to receive peas.

The leaf mould mulch has run out now; we don’t want to use straw in case it combines with the clay to make bricks!  We’re building temporary raised beds, using the wood from the neighbour’s old shed.  These are getting filled with free manure and topped with a thin layer of bought compost.  In the winter, when the soil is soft again, we’ll dismantle the beds and dig this in; now, we’ll raise a catch crop in them.

I don’t see much hope for the remaining seed potatoes, though.  I’ll probably put them out in the lower quarter to break up the soil there, but I doubt we’ll get much from them.  We’re relying on courgettes and squashes to fill in the bare patches.

The allotment is hard work, but so was the resilience garden until it was established.

The techniques we are exploring in the allotment can be adapted to reclaim post-industrial landscapes.  I’m impressed with the mulching properties of packaging card. Once the rainwater distribution system – which we can top up from the communal water trough – is in place, and the perennial weeds conquered, we’ll have the basis of a low-maintenance, high yield system.

Just in time, as the next project is on the horizon – the Resilience Field! 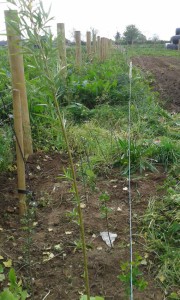 Above is the hedge…there wasn’t time to weed the ground first, so the deep rooted perennials, able to access buried moisture, threaten to overwhelm the thin young trees.  This is the worst section, being weeded by hand.  Once it’s clear, we’ll lay a cardboard sheet mulch around the saplings and cover this with soil, now easily accessible as the field has been ploughed.  The trees will be able to defend themselves in a few years, especially if we import wild garlic as ground cover.

Writing ‘Recipes for Resilience’, I learned how crucial grains were for survival in the seasonal North.  The dry weather isn’t doing British grain farmers any favours; does anyone else worry about poor harvests?  Everyone eats bread, cakes, pies…how many of you bother to find out where the flour comes from?

It’ll take you ten minutes to vote in June.  Instead of banging on about it, use the time to write yourself a shopping list.  Can you order any of it online from suppliers who buy British?  Is there a farm shop nearby, a food market?  Put Facebook down for a few minutes and have a look around.  Read the Hemp Twine Project to see how much difference buying local can make!

“Farmers go bankrupt in the midst of thousands of potential customers for their produce” from ‘The Resilience Handbook – how to survive in the 21st century’.

Then what will you eat?

The rain has finally eased off in Somerset and the sun even comes out occasionally. The soil is saturated and the legions of molluscs are emerging from their winter caves. Yet the intrepid gardener must make the best of it and see what can be grown.

Adding some dry compost or soil improver before sowing will help to soak up the water in seed beds. Circling these with a ring of dry bran discourage slugs. Try and avoid resorting to chemical pellets, though the neighbourhood cats have probably put paid to any natural predators.

If you have windowsill or greenhouse space, start some plants off there. Don’t put them all out at once. Grow enough to have a reserve, and be careful to harden them off before planting out. Healthy plants are the best defence against pests.

It won’t be a good year for the more delicate vegetables. Potatoes can hold their own in most circumstances. Plant them around the edges. The hairy leaves of pumpkins and squash are also resistant to attack, though it is too early for these to go outside. Sow a catch crop of radish or cress in the large patch of empty space they will need later.

Remember to feed your soil. The liquid fertiliser you made last year from comfrey and nettle leaves will do just fine. Peas and beans make their own nitrogen, however, so don’t overdo it around them. Avoid treading on the soil to keep its structure intact. Keep to marked paths in large beds. Once the soil is properly aerated, the difference is obvious.

Brassicas will need constant attention this year. They’re worth some trouble for their winter leaves and the delicious sprouting heads in the following Spring. However, if they can survive the mollusc army, the caterpillars will be next. Planting nasturtiums in the same bed distracts these creatures, who will munch on them by preference.

Leeks do better in clay soil than onions. They develop slowly but steadily, requiring little maintenance apart from weeding. Root vegetables prefer sandier soil, which you can mix yourself to cultivate carrots in pots, or the larger parsnips in tyres.

The Resilience Garden project develops ordinary gardens to provide an emergency supply of fresh food for the immediate neighbourhood. A significant amount of home grown food for the householder all year round is a useful side effect.

This garden, in Coxley, was built using reclaimed materials, at very little cost. A raised bed system is used as the local soil is a heavy clay, difficult to raise vegetables on. The growing area was created in stages over five years, using tyres as a retaining wall to enable easy expansion as soil became available.

It took quite a lot of soil to get a good depth in the vegetable beds. This was mainly reclaimed from building sites. Structure was added by mixing it with kitchen waste and manure. A home-made spray of comfrey, nettle and seaweed provided extra minerals. All the food is grown using organic methods and applying permaculture principles for low maintenance.

The garden was in a useful state of transition for the Open Day as the initial tyre layout had reached the final stage; the shape and size of the plot was now fixed. The tyres were being emptied and replaced by a low brick retaining wall. The higher stacks on the windy corner were still in place, demonstrating how versatile these temporary structures can be.  When the permanent wall is complete, willow hurdles will provide a wind break.

A new bed was being formed on the other side of the garden, using the old tyres to surround a patch of gravel ready to fill with soil. An edible green manure, such as rocket or cress will be planted there by the end of September 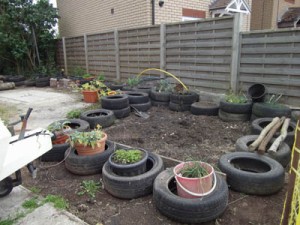 Despite the cold rain setting in about lunch time, we had a dozen visitors over the course of the day, all of whom braved the outdoors to explore the garden. The plant identification game did have to be abandoned and the workshop became a lively kitchen table discussion, but all told, it was a good day!